How many things do you have hanging on your walls? How often do you really, I mean really, look at them?

This is a framed gift from the Burlington Free Press. I received it eons ago. I haven’t read it or studied the photo in years.

What a flattering note from Ed Granai. He was an executive with a local mall in South Burlington, Vermont. That mall was big competition to downtown Burlington, where my store was located. That made the note even more flattering.

Apparently, Ed Granai didn’t know that I did not have an ad agency. Like many local retail owners, I curated my advertising. (I also was the one who cleaned the toilet when we didn’t have a cleaning person hired.)

I wish I had the date of this ad. I would guess it was from the 90’s. Looking at this today, I still like it, although I would have tightened the text a bit.

I’ll give you a little history about being an entrepreneur doing her own advertising. In those days, it was newspaper, radio, and TV. The local paper was where I put most of my advertising dollars.

During twenty-seven years, I went through several Burlington Free Press sales reps. Some were good.  Others? Not so much. During one stretch, I had a woman who was great for advertising promotions, but she was terrible at getting my style.

It was frustrating for both of us. Finally, instead of using her as the go between me and the guys in the backroom, who designed the ads, I went straight to the source.

That was so much fun! I would sit by the designer at his computer; he was a wiz with moving things around and doing the subtle tweaks which made me incredibly happy. Side note…this was years before I owned a computer or thought about doing design myself. I thought he was better than a magician. If only I could remember his name!

This ad was one of great collaboration. The designer at the Free Press thought it would be cool to do a juxtaposition of one of my mannequins against a downtown building which was two doors away from the store.

I couldn’t find the right wig to use on the mannequin. They all looked wrong. I asked him to try the photo with a bald head. I loved it!  It looked perfect…edgy…just what I was looking for.

After the ad ran, Ed Granai, wrote the letter to the editor, and I received another letter from a cancer patient, thanking me for presenting baldness as beautiful…talk about touching my heart.

Without the years of curating ads, working with the staffs who would produce my ads (which was part of the service from the newspaper, the radio and TV stations), I wouldn’t be in the position to bring you my blog posts today.

During the pandemic I added posts about fashion to my beauty posts. After three days, I got several messages. “Nan, are you a fashion influencer now?”  Yeah…since 1977. It simply didn’t have a name then. 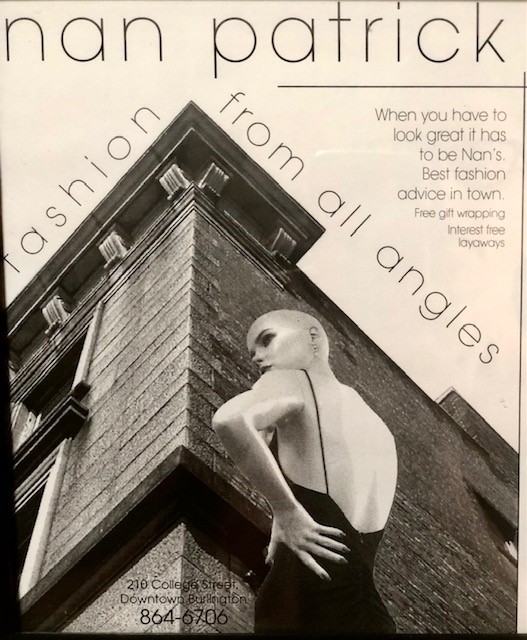 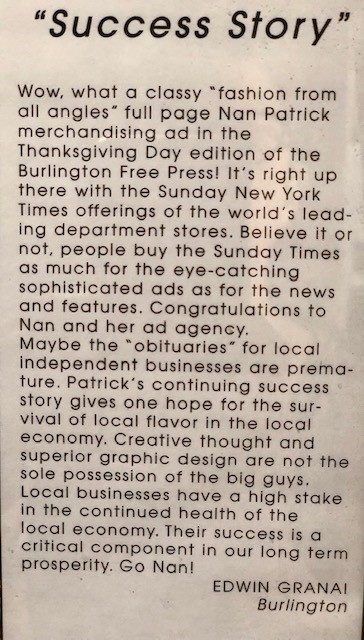 View all posts from Your Wardrobe Studio